The industrial odour is produced by an expansive range of organisations, both private sector and government organisations. Processes such as food production, waste incineration, infrastructure, wastewater treatment, chemical processing, and many more are involved in the emission of odours.

Odour is a variable dependent on certain environmental factors that can considerably increase its concentration of both smell and chemical composition. Studies carried out by governments and private organisations conclude that, high temperatures multiply the odour intensity, wind velocity and direction can carry odour to greater distances.

Due to the constant growth in industries and population alike, in developed countries, people that reside in a close locality to the odour source often complain of the emissions. Therefore, commercial enterprises are often restricted by the government as to the level of discharge from their processes. This requires them to opting for various odour control methods for compliance with any conditions or limits put in place by their operating licences.

Malodorous industrial odours are generally originated from the anaerobic decomposition of organic compounds like hydrogen sulphide (H2S), nitrogen, sulphur and so on. The chemical is not soluble in wastewater and hence, when released into the atmosphere, produces a strong, nauseating and offensive odour. The most common and pungent odours lingering in and around wastewater plants smell like rotten eggs, ammonia, garlic and others. Other odour-causing chemicals include amines and mercaptans, produce odour that is described as earthy and organic.

For industries, biofilters are a tried, tested and effective method for reducing odour and other gaseous emissions. A well-designed biofiltration process can reduce odours and hydrogen sulphide (H2S) by up to 95% and ammonia (NH3) by up to 80%.

Packed with pumice and inoculum, PDFL’s biofilters guarantee outstanding performance, with minimal-waste. Pumice is used as an effective and economical alternative to other media types for the treatment of municipal and industrial sewage odour. 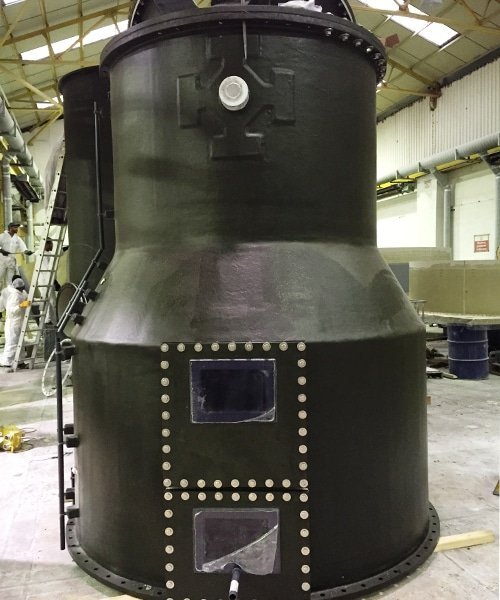 Its operation requires clear water or decontaminated effluent to maintain the moisture in the filters. The irrigation mechanism is closely monitored to ensure optimal performance. These sewage odour control biofilters are colonized with very specific inoculum to each site, that efficiently degrade the chemical compounds like mercaptans, H2S, ammonia, and other organic sulphides.

Biofilters are versatile, not only are they capable of removing industrial and sewage odours but can also effortlessly remove wastewater odours as well.

The Operation Of Biofiltration System

Odorous air is ordinarily drawn through the biofilter using a fan of multiple fans and passed through the filter media bed. The environment is kept humid with a water spray, which provides perfect microbial proliferation conditions in a biofilter. The growth of various microorganisms and bacteria in the wet filter layer breaks down or oxidizes the odorous compound dissolved in the damp media. Organic acids are degraded, hydrogen sulphide is oxidized to sulphur and sulphuric acid state which is simpler component to treat.

Reasons To Install Biofilters At Your Industrial Site

PDFL’s Biofilters Stand Out Because

The pressure on organizations and facilities to manage the untreated emissions from their processes, will increase as governments implement more strenuous environmental targets. PDFL’s biofiltration systems are an effective solution for them. The biofilters manufactured at PDFL are designed to remove industrial and wastewater odours or any other sector that requires an odour solution.

Talk to one of our experts to discuss your requirements, or visit our website for more information.